The complete series of daily and weekly situation reports  (sitreps) written by UN peacekeepers in Rwanda — published today by the National Security Archive for the first time in full — provides a detailed, on-the-ground perspective on the genocide in Rwanda that started twenty years ago today.

Today’s posting is a collection of every single sitrep from the beginning of the United Nations Assistance Mission for Rwanda (UNAMIR) in October 1993 to the end of the genocide on July 18, 1994. The documents tell a story of the broken Rwandan political system and a peacekeeping force that, because of a lack of support from UN headquarters in New York and from the members of the UN Security Council, was not equipped to handle the rising violence.

This posting is the sixth in a series being published for “Rwanda20yrs,” a joint project between the National Security Archive at the George Washington University and the Center for the Prevention of Genocide at the United States Holocaust Memorial Museum. Upcoming postings will include documents about the first days of the genocide, the failure of the Arusha Accords, and the withdrawal of UNAMIR troops, among other topics.
(Bron: NSA) 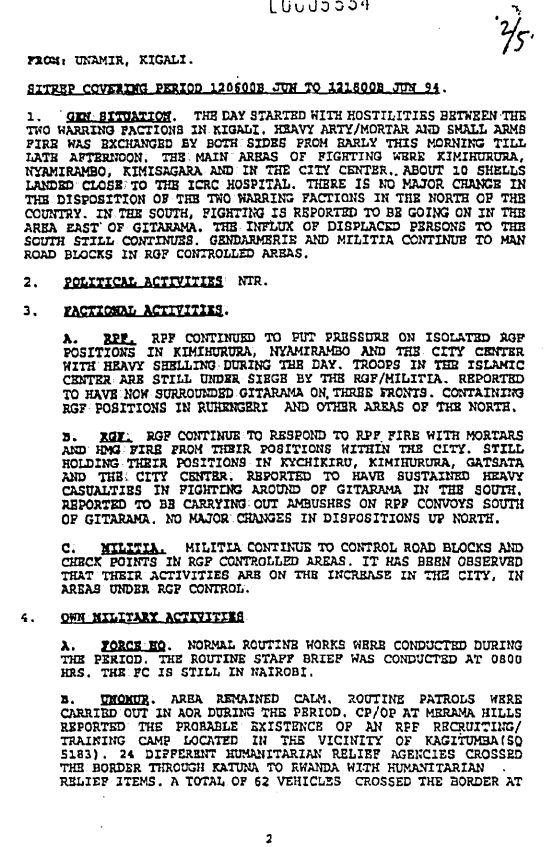 Zie ook documenten:  The Rwandan Refugee Crisis: Before the Genocide