Secretary of State Henry Kissinger ordered a series of secret contingency plans that included airstrikes and mining of Cuban harbors in the aftermath of Fidel Castro’s decision to send Cuban forces into Angola in late 1975, according to declassified documents made public today for the first time. “If we decide to use military power it must succeed. There should be no halfway measures,” Kissinger instructed General George Brown of the Joint Chiefs of Staff during a high-level meeting of national security officials on March 24, 1976, that included then Secretary of Defense Donald Rumsfeld. “I think we are going to have to smash Castro,” Kissinger told President Ford. “We probably can’t do it before the [1976 presidential] elections.” “I agree,” the president responded.

The story of Kissinger’s Cuban contingency planning was published today in a new book, “Back Channel to Cuba: The Hidden History of Negotiations Between Washington and Havana,” co-authored by American University professor William M. LeoGrande and Peter Kornbluh, who directs the National Security Archive’s Cuba Documentation Project. Research for the book, which reveals the surprising and untold history of bilateral efforts towards rapprochement and reconciliation, draws on hundreds of formerly secret records obtained by the authors. The documents detailing Kissinger’s Cuban contingency planning in 1976 were obtained by Kornbluh through a Freedom of Information Act request to the Gerald R. Ford Presidential Library.

“Back Channel to Cuba” was released today at a press conference at the Pierre Hotel, the site of the first official secret meeting to normalize relations between the United States and Cuba in July 1975. The authors suggested that the history of such talks, and the lessons they hold, remain especially relevant at a time when both President Obama and President Raul Castro have publicly declared the urgency of moving beyond the legacy of perpetual hostility in U.S.-Cuban relations.
(source: NSA)

Afbeelding: The first page of the memorandum of conversation of the historic July 9, 1975, U.S.-Cuba meeting at the Pierre Hotel 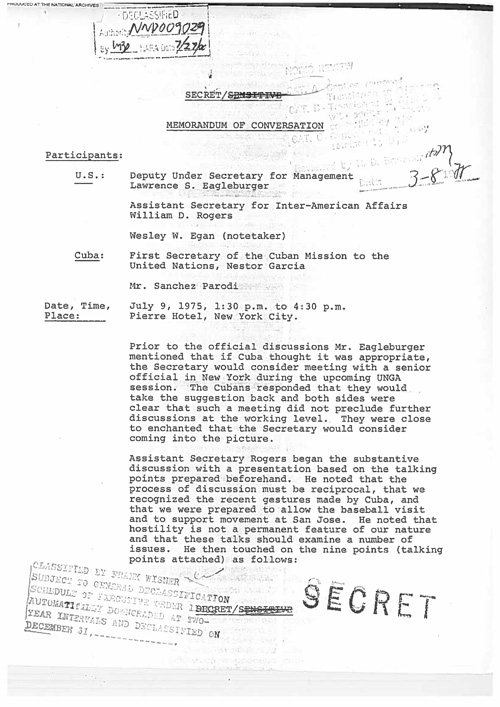